Mostly this page is directed to foreigners: give them some faint glimpse of our traditions. I don't even imagine, that I could give some broad view of it...

Very many decorations are made of straw. But only handpicked straw is good. Modern heavy agriculture-machines destroy the straw. But okay...

Everything starts usually with sauna. About 3PM in 24th or so. But I had that in the 23th in my own sauna. Okay, I admit that real purists think, the it should be warmed with wood. I admit, that is better. But...

It was really close, that my Helmi-cat would have been in sauna, too. But she managed to escape. Afterwards she went to löyly-room. So heavenly warm place!

Our "big day" is December the 24th. Very usually (in most countries), the night between 24th and 25th. But not here.

The weather was rather good (I speak about Celsius all the time)! The temperature varied between zero and minus two and a half. So, the small amount (much less than one centimetre, maybe a quarter-inch) of snow remained here. We had no rain in 24th. But then some in 25th. 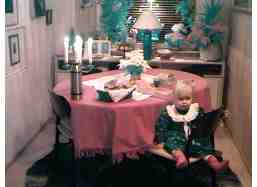 We started everything with "glögi". That warmed wine with spices (cinnamon (surely), clove (probably), cardemon (quite likely), and other spices). That gives the Christmas-smell. So, we don't drink any egg-noggs!

Sitting is my niece, Tuuli.

And then biscuits, cakes. And Christmas-speciality is ours 'joulutorttu'. But very delicious! 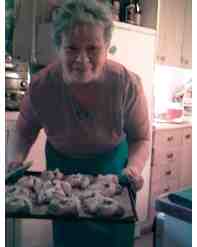 'Joulutorttu' (maybe the suitable translation is plum tart) looks like this. In the middle there is plum jam. And the whole thing is done out of puff pastry.

That isn't very sweet thing. But the delicious puff pastry!

Both cats (my cat 'Helmi' and my parents' cat 'Nilla') went quite immediately to bed. And started intensive sleeping: They knew the whole idea of Christmas. 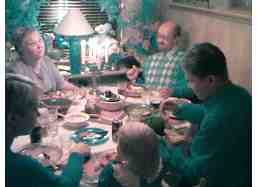 Then the first things (or how one calls those). Mainly fish. Baltic herring. Herring. Raw salmon (Yes, really! I had sandwich of that, when I made this page, delicious! (I try to explain it! One takes the fillet of a salmon. And then puts salt to it. Let it lie for a day or so. Then it's ready!)). Russian salad. 'Rosolli' (A salad made of beet roots, potatoes (maybe), boiled carrots, apples, sometimes herring, onion, pickled cucumber and dressing to it (whipped cream, vinegar and soured cream colored with beet roots)).

In table we remembered, that usually we have reindeer. Thin, very thin slices of it. But not this time. No problem! 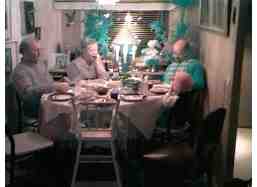 The main thing in it is the ham. Extremely big (about 10 kg (that means something like 20lb)). We had only very small one, because we ate turkey. Both were carved in kitchen - very much more useful to do that there. Then there's swede casserole, and carrot casserole. Baked peas. 'Rosolli'. Think something, it's there... 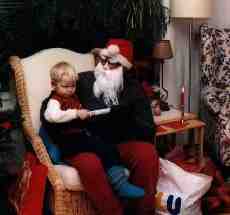 Santa Claus. We call him as 'joulupukki'. And that he lives at 'Korvatunturi'. That's some kind of mountain here. And located in North-East Finland, very near to Russian border.

Traditionally Santa is clothed in quite gray outfit. One should remember that "red & white" outfit is totally made up in Coca-cola marketing division! Exceptionally good way to advertise everywhere their brand!!

Children wait that instance with fear and joy. Fear if they had been too "bad". Joy for waiting the "great moment". And my father missed it all!

Child is my nephew (Pauli). Everything went well - at least Pauli said, he got too many presents (he must have been ill to give that sort of statement voluntarily)!!! 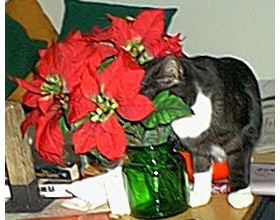 And then something from our Christmas. Of course, I said quite must above this. But surely not all.

Our Christmas flower is mainly poinsettia (Euphorbia pulcherrima). But that is really poisonous, that eager eating is just mortal thing! No worries! That's artificial one. Made of cloth or something like that!

Another flower for Christmas-time is hyacinth. It gives very strong (and good) smell. And then tulips, very small, with their "onions". 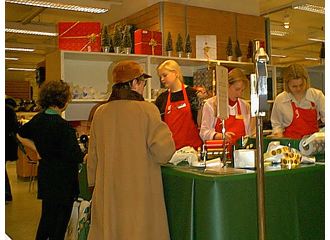 Christmas-hysteria! I really hate that! Some study said, that level of a stress-hormone raises during that (like fighter-pilot in a fierce fight). For males, that is. And it seems to be very true!

There seems to be so much clerks in that picture. Yes. But here isn't the queue! About half an hour (and maybe that isn't enough). 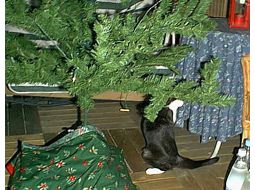 I had an artificial (actually, we have quite much spruces in our forests) Christmas-tree in my balcony. And Ökö just loved it. Very strongly. Though I haven't a picture, how she climbed into it. Or fell it down (timber...).

Why artificial tree? Because "real" tree mostly smells. And this is located in my balcony. The smell doesn't go in. 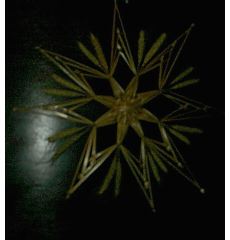 This is the thing in my door. We (or actually my father did) put it into there December 19th. 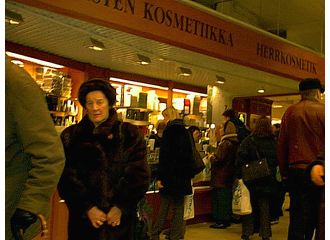 I had to go back to that department store. Because, they haven't one item, I required. They said, that they have it in Friday. Good, except I didn't have the time. Only a fool would come on Saturday or Sunday. So, I took Monday, 21st. Bad decision! Because there was quite a rush anyway.

Every peasant (You can easily see, that I don't love much them) should come then with own car. Driving it like tractor (so extremely slowly; but the absolute emperor of universe sits there...). So the traffic was just awful: normally the cab trip from my apartment to the center of city takes 20 minutes or so. Now it took one hour. 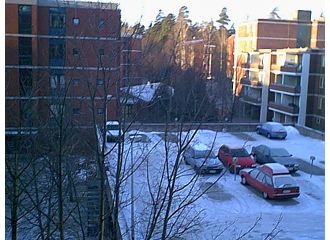 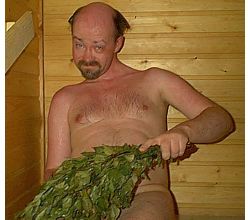 Then quite special Christmas-sauna. Usually that's 24th, but not possible with me. I'm holding a 'vihta' (okay, someone call it with a name of 'vasta'). One whips oneself with it. That makes sweat to run fiercely. And quite nice flavor into the sauna. 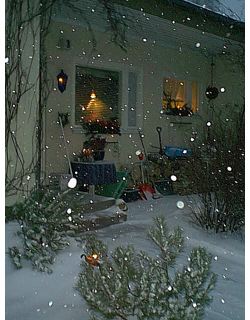 I was transported to my parents' place at Uusmäki roughly at 2 o'clock in the afternoon. It snowed quite heavily then (about 10-15 cm of snow). But that doesn't make any troubles to us or our traffic. Later that turned into snow mixed with water and then into sheer water. 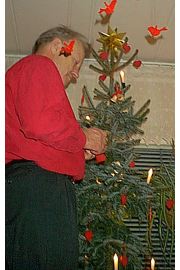 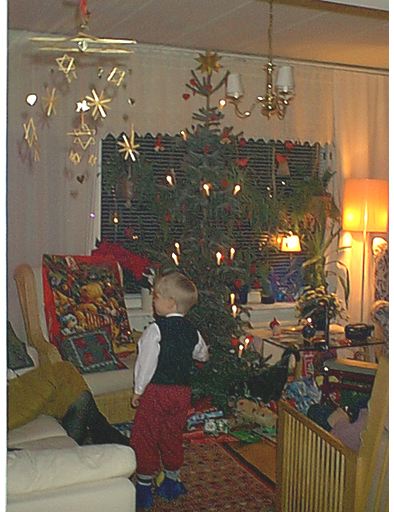 Christmas-tree is decorated at Christmas eve. Our tree was very slim one, that fitted better into the living room.

Elve-patrol has visited a littele bit earlier bringing some gifts. 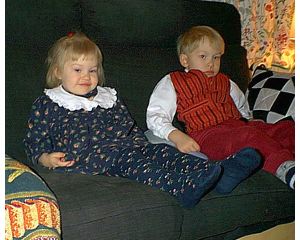 And then we have the problem with extra-nervous kids. But that has very simple solution: cartoons by Disney... 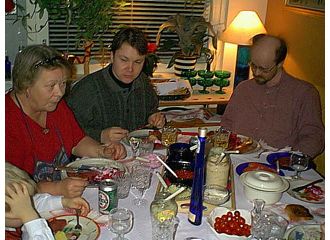 Our precourse. Especially fish-roe from rainbow trout was delicious. That was on a toast with sour cream and chopped onions. Delicious! 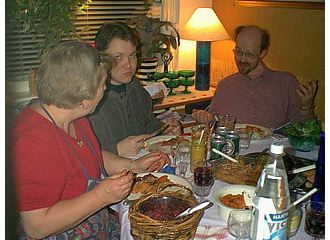 Main course. Read, what there were, from previous year... 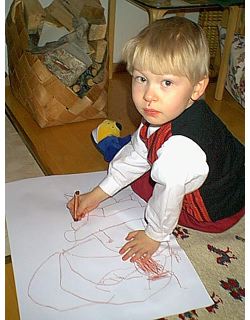 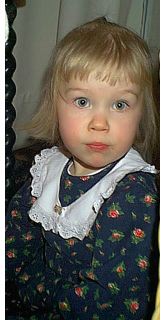 Both kids had problems with eating: much too nervous for that! 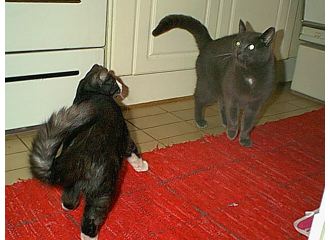 Cats were nervous, too! Here's Ökö and then Nilla, the cat of my parents. 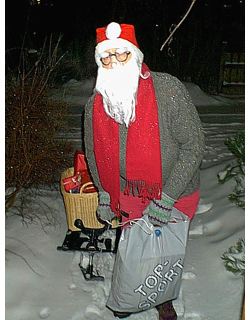 "Santa is coming." That made both kids just so even more nervous. Both of them ran around and tried to hide themselves as well as possible.

Santa had a sleigh behind him. Pauli has wanted just such! Santa knows everything.

My father missed everything! He had some kind of problems with his car. 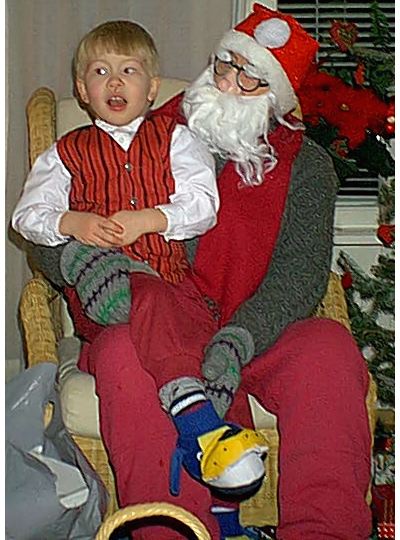 Pauli at lap of Santa. Tuuli didn't even dare to touch Santa.

Pauli had some doubts about personability of Santa. But he only whispered them. So, that Santa wouldn't hear... 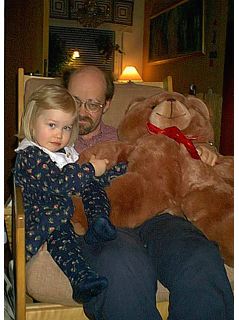 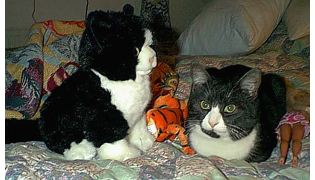 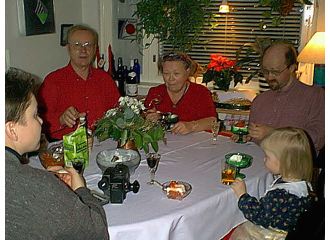 Then, after presents, we had some dessert: ice-cream (just quite ordinary vanilla), cloudberries, and then some kind of cheese (even my dictionary (and it's really thick one) hadn't suitable word for that).