We had quite big festival (June 21th, but actually it's June 20th-22th), the midsummer one (our Finnish name "juhannus"). Usually persons start their holidays then (about a month). In more southern parts of Europe the "normal" holiday is in August.

During "juhannus" nothing happens! In cities! They are quite dead then. But countryside, everyone (or not everyone, only 99%) is there. The traffic jams from the cities in start of that are quite vast!

And then how the "juhannus" is celebrated. Most of all: drink! The consumption of alcohol is quite staggering. And Finns drink quite hard drink: "Koskenkorva" (very much like vodka).

Much alcohol and water make together quite deadly combination. Drinking much doesn't improve swimming! Most of drowned have their flies open. Literally! Usually something like 10-20 (sometimes even more) die every "juhannus" (compared to normal weekend with hardly one dead).

On the other hand a lot of new life is made in "juhannus". After nine months in hospitals... 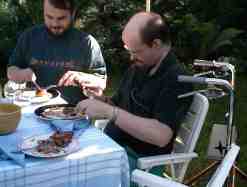 Usually some grilled food is eaten. Typically that's sausages. And then potatoes comes just then (they are really good).

And then strawberries (but not this juhannus!)! They are extra-good in this country (you know, long day)! 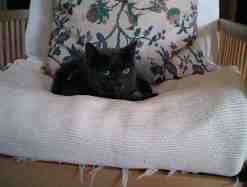 Helmi was with, too. Not in spirit, but physically, anyway. 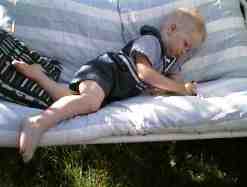 My nephew, Pauli, has his eyes still open. But in the midnight, then the really big fire was lighted - then they were really open. He was amazed about that. And everyone heard about it.

Of course, that fire was a remain from pagan times. But who cares... 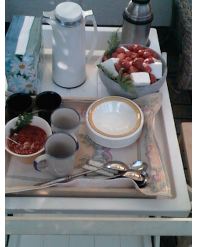 Now you can jump to previous juhannus. And here to next one.

Weather in this juhannus was rather chilly, but not so chilly as weather forecasters had seen it. Highest temperature was 27.2C (even I don't believe that), and lowest 9.5C. The sky was very clear and sometimes we had some wind.

That picture is about our dessert. In this case ice cream with fresh strawberries (sorry to say, but they were from Belgium). As main course we had some wild salmon (and that was really huge fish).

And before it we had different types of herring. And then new potatoes. Very traditional here. And good, too.

Then some macabre details, the death-toll:

Even this day was rather cold: usually that usually causes less drowned ones. 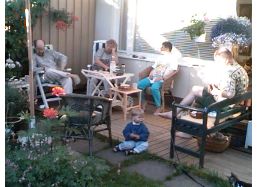 This time we were visited by my cousin Heikki Hyötyniemi. His wife is very pregnant... 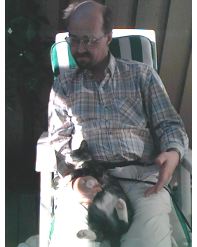 This time Ökö was there. And she clearly enjoyed that visit.

When Heikki left, Ökö thought, that I went with him, too. And that resulted very sad kitten. When she saw me again...

Her real name seems to be "Harry Houdini" (or something like it). Because cats are very flexible... 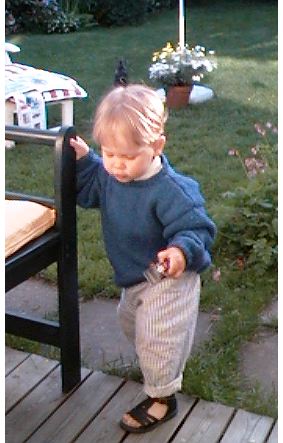 The son of Heikki and his wife Sanna. His name is Elias, by the way. 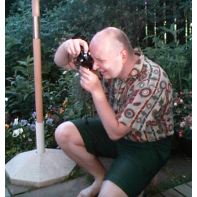 And father took pictures of his son. And again.

In the actual day we had rain, plenty of rain. And temperature was rather cold (something like 12-13C). Pure hell in summer cottages! Because those are very small and very primitive. 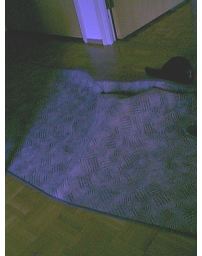 You can jump to previous Juhannus from here.

Bogeyman under the carpet. Or maybe the carpet is a bogeyman. Who cares. Ökö decided anyway to fight!

There is the morbid head-count for this midsummer: 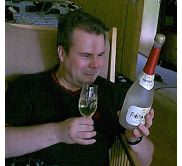 We started this festival with sparkling wine. Here Ari Mujunen is looking the bottle eagerly. And why not, he is technology student, which are supposed to appreciate liquor. 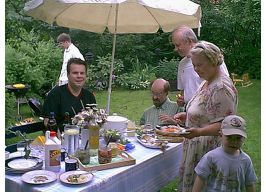 Really warm weather! Luckily the sun wasn't shining during that eating. I wouldn't like that, no! 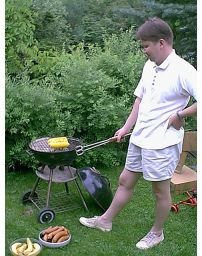 Mika handled grilling. He knows that really well. Now he is grilling corn-cobs. 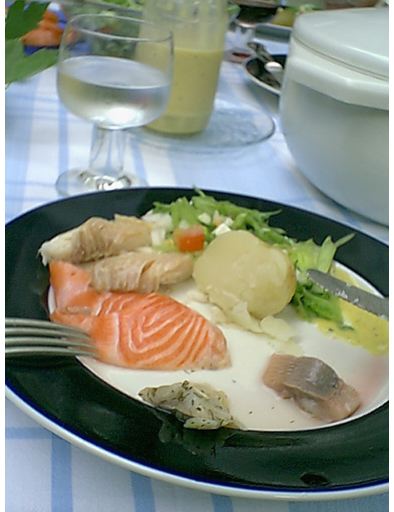 We started everything with fish.

First of all 'graavi lohi'. That's the pink thing under my fork. We add salt a little sugar and maybe some herbs to raw salmon. That should be a few hours there. And then it's ready! And it's really good.

Above it is smoked powan.

Then different pickled herrings. Some salad. And new potatoes. 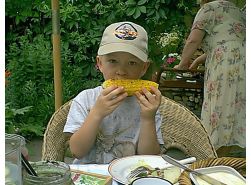 Pauli wants corn. And I must agree, that something good comes from USA... 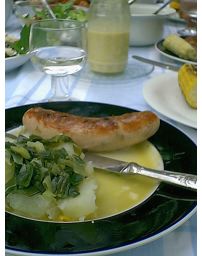 Pohjalainen sipulikastike. Delicious thing. That's really some kind of fat-and-salt-bomb. But hey, not in fact. Because one needs those things when sweating heavily! At least salt. 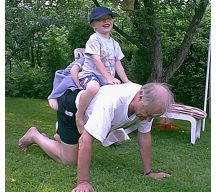 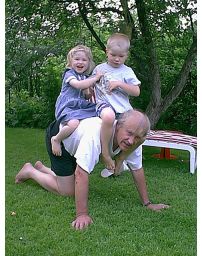 After eating my dad plays with kids of my sister. 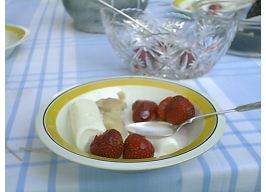 But that wasn't end of eating, no! Now we had ice-cream. With fresh strawberries. And grilled banana. 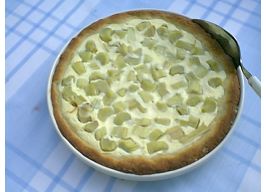 Rhubarb pie! Okay, the best time for rhubarbs has gone. But Pauli wants it. And I want it. 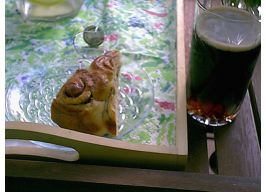 We call this thing Boston-cake. I looked at one hyper-big dictionary, but that doesn't say anything. And I don't really know, why.

There are buns, which "melt together" because they are so close each other. So forming one extra-big bun. 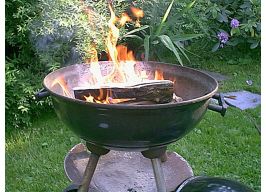 Our grill acted as small bon-fire! 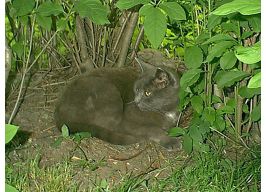 My parents' cat Nilla was there, too. Of course not in middle of everything. But somewhere near it, observing everything.