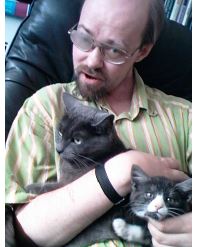 Poor Helmi! When the kitten came, it had all the interest. And Helmi gave way to it, all the time. And Ökö was just such a bully...

Very important thing is seeing both cats together. But I had to keep them very hardly in my lap. You can see another picture in Helmi page.

Link to next one. 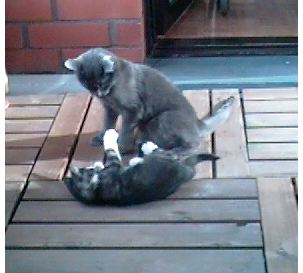 Originally I got her as mate of Helmi. And it seems to be so! Both cats seem to like the situation. 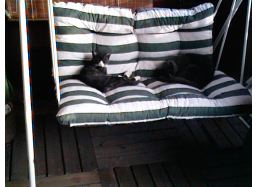 Then one has to sleep a bit. Both cats sleep in my balcony. So peacefully. There is a big picture of this situation in Nilla-page. 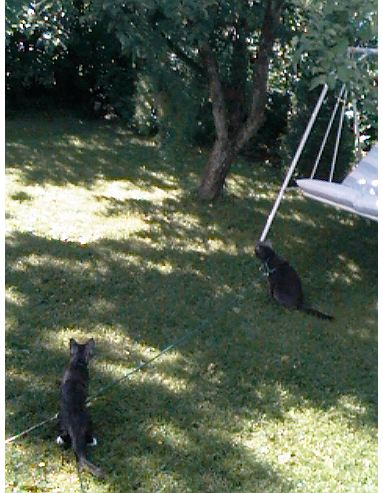 On Saturday 4th July (OK, that's independence day of USA, but just a normal day in rest of the world) both cats were in Uusmäki. Big event in cat life!

One can see all three cats from the big picture! What? The big cat of Uusmäki is lurking there. Easiest You see the place, when You look at the place, where both other cats are looking... 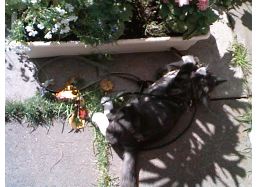 And actually that was rather warm day! 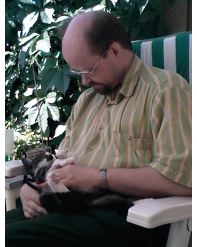 The lap of Olli is actually quite good place. Because it's so safe! 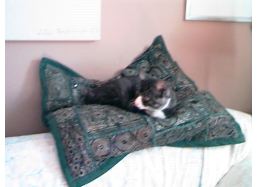 Then really a good place for sleeping! 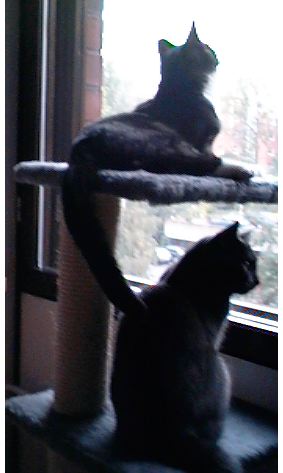 Things in outside world are so important! Quite often Ökö looks just to the opposite direction: She is so social and wants to share everything. Okay, she's quite anti-social towards Helmi! 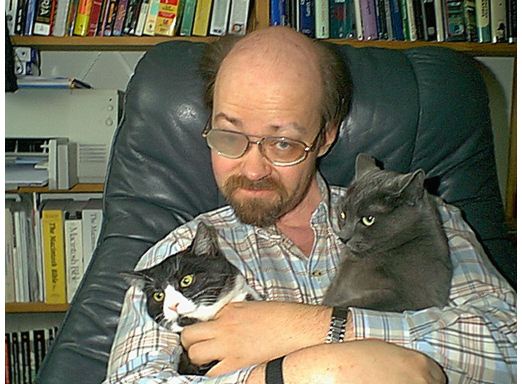 Then here is a group-picture of us all. This has been taken at middle of November 1998. Ökö has grown, that one can see. But no changes in theirs attitudes: Oko likes being in my lap, Helmi hates it. Then a link to previous. 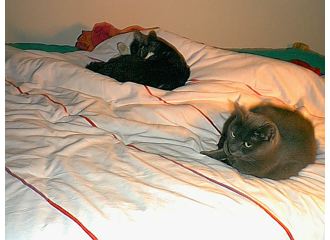 My bed in Rautakiskonkuja. Heaven! Helmi escapes when I want to sleep. But not Ökö, no way! She looks badly to me, because I've interrupted so important sleeping.

I thought, that I didn't had reported sleeping-habits of my cats. No! Okay, I mustn admit, that sleeping is extremely important thing for cats... 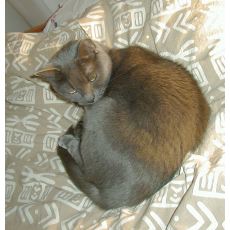 Helmi disappears immediately, when I start to, fiddle with my clock-radio. She knows, that I'm going to bed then. And maybe I would take her to my lap. That's awful possibility! 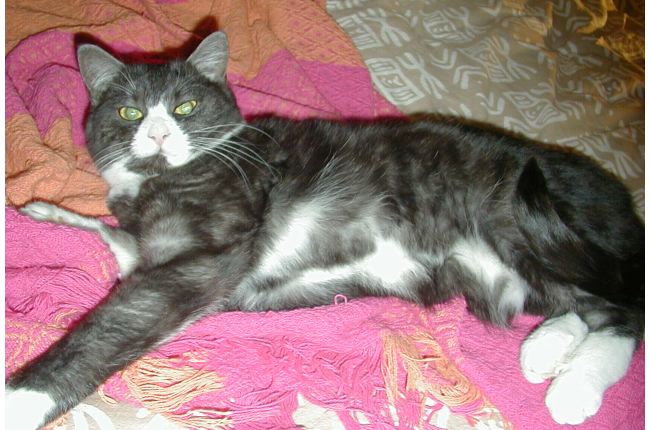 Ökö, however, doesn't move. She just stares that ignorant peasant. And that peasant is really ignorant: even intensive stare doesn't help. 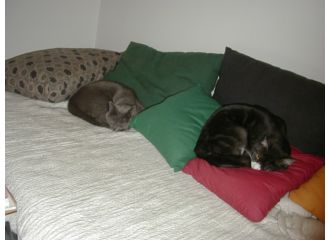 At middle of November 2001 I was in hospital. Prolonged cough. The reason was clear: asthma!! I'm really worried now.

At least, my bed-room is cat-free-zone now! 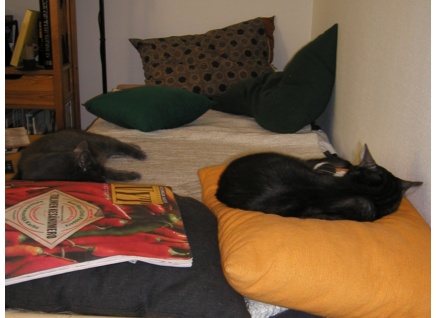 Then a picture from summer 2002. Probably this was second softest place. This was hottest day of that summer. But of course cats really love it. I didn't! 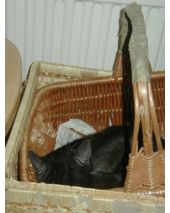 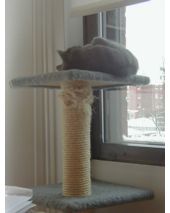 My bed-room is there! Obviously Ökö has learned, not to go in. 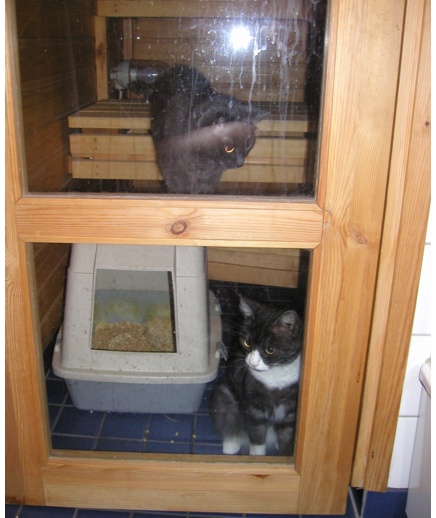 Summer 2002 was really warm. Much too hot. And summers before were just as uncomfortable.

Windows open?? No, not good. Because of both cats! They have fallen down from there. And especially Ökö was really badly injured!

Then one solution to problem is net. But that doesn't help much 8-(

Okay! Cats temporarily to my sauna. And every possible window open.

That sounds cruel?`But no it isn't so. Cats love that calm place. And anyway they sleep most of the time anyway. They are up at late at night: just when I took this picture.

The pen-pal from Vancouver said, that kitties surely suffer of that kind of treatment. No! And I have four reasons, too: 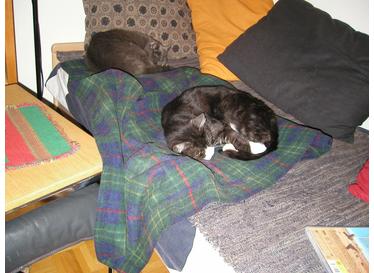 This picture has been taken about a week before Christmas 2002. This thing is really soft and probably contains some smell of me. And cats really love that smell!

Normally cats really charge when they hear doorbell. They want to see, who is coming (and Ökö wants naturally some petting). But this is so nice! That's so much better place! 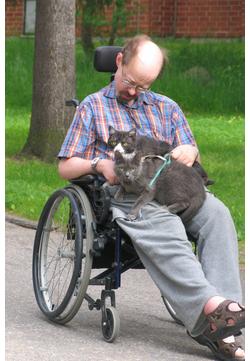 I have many pictures of my cals.But thoser are from winter. Because they are used for my chrismas-card.

So, now I want picture of cats in Summer surroundings.I was a bit worried, do they come to my lap. But actually there were just no problems. Because they were really quite scared. But very interested.

But the way gray cats (like Helmi). They are gray all the time. Cats aren't like humans - they have that nice colour as young. 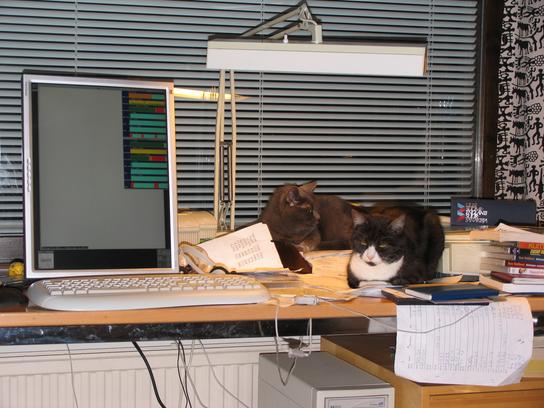 I work with computers (three of them (January 19th 2006) all the time. Helmi wants to be near me. She doesn't want to be rubbed.

But Ökö really wants just that. Now she figured that. She is in front there. So, I can easily reach her. And she really loves it! 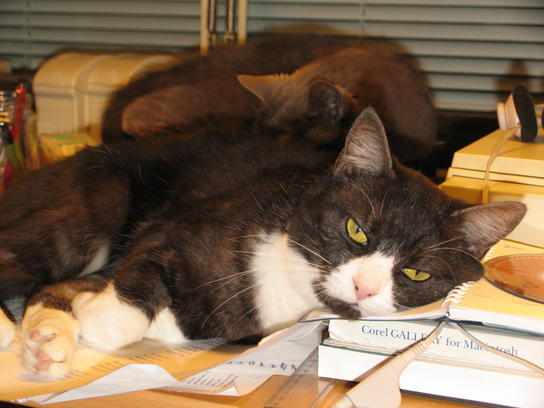 Oops, another picture of just same situation. But situation is very nice. Two such lovely creatures. Though Ökö has rather awful face0, when Olli does flash all the time. 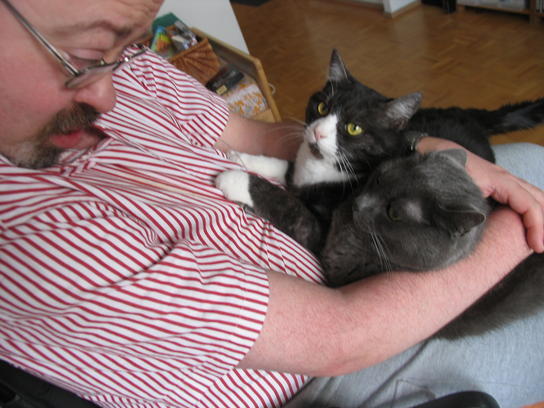 Ökö comes to my lap just like that, there's no problem. But Helmi,m that's really quite special thing. Father gave her to my lap. So he took several pictures. And some worked quite nicely. 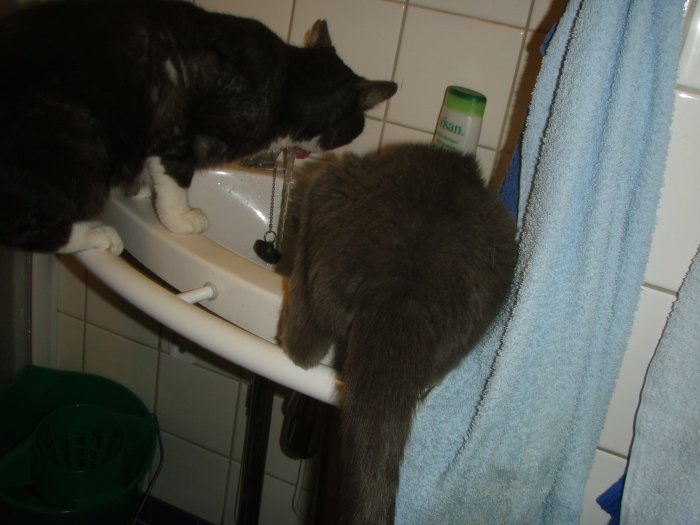 I have named this as Ökö-water. She wants to drink directly from faucet. Now she has told that to Helmi. And Helmi obviously loves this same thing. Olli watches telly, that's clearly quite boring.
Cats obviously want to drink water, they get themselves. They have just very good and fresh water. But that's just so boring!
Olli Arnberg <oar@arnberg.fi>